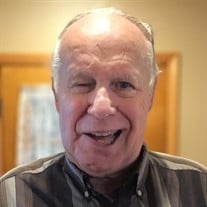 Clyde Boyer, age 79, of Savanna, IL, passed away Monday, February 24, 2020, at FHN Hospital in Freeport, IL. A funeral mass will be held Saturday, February 29, 2020, at 11 am at St. John’s Catholic Church in Savanna, IL. Visitation will take place from 9 am to 10:45 am, at Law Jones Funeral Home in Savanna, prior to the mass. Clyde was born January 1, 1941, in Stockton, IL, the son of Arthur and Wynnetta (Thommason) Boyer. He grew up in Mt. Carroll, IL, and attended Mt. Carroll schools. On October 22, 1960, Clyde married Rosalind Altensey, and they went on to have two children, Richard and Christine. Clyde devoted 24 years to Carroll Service, as a truck driver, and spent 15 years farming the Glen Garry Farm for SJ Campbell. Clyde was active in 4 C’s Club and loved his unofficial club – gathering at McDonald’s for morning coffee with all the “old guys.” In his free time, he’d tinker with whatever small engine he could get his hands on. He especially liked working on lawn mowers. Clyde will be forever remembered for his kindness and generous spirit. To say that he was helpful, would be an understatement. He put others’ needs before his own and was always eager to lend a hand. Aside from spending time with his family, helping others was quite literally Clyde’s favorite thing to do. But as we said, it was family that reigned supreme in Clyde’s life. He was a loving, attentive, and devoted husband, father, and grandfather. That devotion was never more evident than when his wife of 59 years, Rosalind, was admitted to the nursing home. Clyde never missed a single day, when it came to visiting her. Clyde will be dearly missed by his wife, Rosalind Boyer; son, Richard (Rodica) Boyer of Niles, IL; daughter, Christine (Joseph) Jensen, of Savanna, IL; three grandchildren, Justin (Erica) Rettenberger, of Temecula, CA, Abigail (Michael) Boyer, of Sullivan’s Island, SC, and Clare Boyer, of Sullivan’s Island, SC; honorary grandchild, Josh Denome; great grandchild, Brielle Rettenberger; brother, Eugene (Betty) Boyer of Thomson, IL; sister, Janice (Bob) Boyer of Savanna, IL; half-brother, Milo Boyer of Stockton, IL; and many nieces and nephews. Clyde is preceded in death by his parents, Arthur and Wynnetta, brother, Dale Boyer, and half-siblings, Bud Boyer and Joyce Brinker.

The family of Clyde A. Boyer created this Life Tributes page to make it easy to share your memories.

Send flowers to the Boyer family.