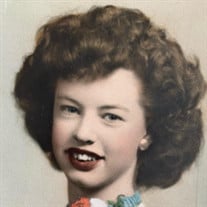 Cleo M. Brown, age 91, of Mt. Carroll, IL, passed away Friday, February 5, 2021, at Allure Nursing Home. A memorial service will be held Saturday, February 13, 2021, at 2pm at Law Jones Funeral Home, in Mt. Carroll. Visitation will take place from 1pm to 2pm, the day of the service. Burial will occur at Chadwick Cemetery on a later date. Saturday's service will be video-streamed on the Law Jones Facebook page which can be viewed here: https://www.facebook.com/groups/2745600959026066/ Cleo was born May 12, 1929, in Chadwick, IL, the daughter of Ward and Erma (Lego) Weber. She attended Chadwick schools. Shortly after her graduation from high school, Cleo married Oscar J. “Junior” Brown, on June 19, 1948. Thus began, as one grandchild fondly put it, “the greatest love story.” From that moment, Cleo and Junior were inseparable. Owning and operating a farm together, they were blessed with the opportunity to work side by side, providing for themselves and their two children. The farm, requiring their constant attention, didn’t allow for them to get away, often. But they didn’t let that dampen their social life. They turned their farm house into the unofficial community coffee shop, where visitors were always welcome for a hot cup of coffee, baked goods, and most importantly, good conversation. One year, Cleo kept track of how many friends they hosted, and the number came out to over 1000 visits! Cleo had a knack for recording the events of her social circle and her community. Throughout her life, she kept a calendar, where she would not only track her schedule, but would regularly record seemingly mundane events from that day, such as visitors, completed tasks, and local and national events. Years, and even decades later, this sort of living historical document, as become a gift Cleo’s family will forever cherish. As Cleo progressed into her later years, her life shifted a bit, as it does for us all. Her gardens and strawberry beds, for which she was known, became a thing of the past, and she lost her dear Junior in 2013. Then, a few years ago, she made the transition into the nursing home. But just like the rest of her life, Cleo was always able to make a life and home out of whatever hand she was dealt. She turned Allure Nursing Home into her home, finding clever ways to immerse herself in her new world. To the delightful entertainment of her family, and the staff, she even referred to the common area as “Downtown.” Until her last days, she kept her family top of mind, and close to her heart. Every Wednesday (the day of the week Junior passed) she would think about how much she missed her “buddy”, and she strived to remain informed about the lives of her family members. She adored being a grandmother and great grandmother, and was eager to listen and provide advice and love to her grandkids. Always a witty woman with a great sense of humor, her grandkids came to realize that she was a great listener, but “you just might not like what she had to say about it.” Cleo loved her family dearly and will be forever missed by her two daughters, Bonnie (Rodney) Gruenwald, of Chadwick, IL and Vicky (Tim Stanton) Jones, of Mt. Carroll, IL; six grandchildren, Doug Jones, of Milledgeville, IL, Jamie Jones, of Chicago, IL, Ty (Jess) Gruenwald, of Beloit, WI, Travis (Niki) Gruenwald, of Onalaska, WI, Kristi Jones, of Dixon, IL, and Tony (Sheryll) Gruenwald, of Italy; 12 great-grandchildren, Cameron, Dominic, Clarissa, Zander, Kiyah, and Brayson, Kalie, Jasmine, Dominic, Bailee, and Kacen, and Ryker; sister-in-law, Wanda (Robert) Stewart, of Chadwick, IL, and several nieces and nephews. Cleo is preceded in death by her parents, Ward and Erma; husband, Junior; brother, Eugene (Francis) Weber; and nephew, Terry Weber.

The family of Cleo M. Brown created this Life Tributes page to make it easy to share your memories.

Send flowers to the Brown family.