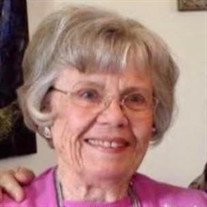 Clarice Ida Nicol (nee Schadewald) passed away peacefully at home on July 19th at the age of 96 years 3 months. A funeral service will be held on Saturday, July 24, 2021 at 11:00 am at St. Peter’s Evangelical Lutheran Church, Savanna Illinois. Visitation will be held at 10:00 am at the church. Burial will take place in St. Peter’s Lutheran Cemetery in Savanna. Clarice was born April 19, 1925 to Ottmar and Elizabeth (Altergott) Schadewald in Manitowoc, Wisconsin. She was baptized on May 10th of that year at First German Lutheran Church. On March 17, 1940 she was confirmed at First German Lutheran Church. She graduated from Lincoln High School in Manitowoc Wisconsin. She lost a special friend during WWII but afterward corresponded with his good friend Lee Nicol. They met when he returned from the war. Clarice married Leland (Lee) Nicol on November 10,1945 in Manitowoc, Wisconsin. They were able to celebrate 67 years together. They were blessed with two children, Nancy Lee (Richard) Ebeling of Cedarburg, Wisconsin and Mark David (LuAnn) Nicol of Austin, Texas. They were further blessed with 6 grandchildren, Raschel Nicol Harbison, Heather Ebeling (Richard) Kretz, Kristi Nicol Swice, Jonathan (Emily)Ebeling, Sarah Ebeling (William) Vanasse, and Derek Nicol. They also have 11 great-grandchildren, Mackenzie, Ayden, Evan, Jayden, Izzabella, Josiah, Gabriella, Lilliana, Madelyn, Luca, and Sage. Over the years, Lee and Clarice lived in several homes in Savanna, Illinois; Oregon, Illinois; Stevensville, Michigan; and back to Savanna, Illinois. Clarice was very involved with the Lutheran Church, especially with the Lutheran Women’s Missionary Society (LWMS), holding the office of reporter for her congregation and treasurer for the National organization. Clarice and Lee were also involved with Camp Lor-ray, a Lutheran camp in Muskegon, Michigan. Clarice enjoyed playing cards with friends, doing crossword puzzles, playing golf and playing games with her family. Clarice spent the last 6+ years of her life living with her daughter in Cedarburg, Wisconsin. She became a member of David’s Star Evangelical Lutheran Church, attending church and Bible study as long as her Parkinson’s Disease allowed her. She was preceded in death by her parents, her husband, her brother Dale Schadewald, and several sisters and brothers-in-law. She is survived by her children, grandchildren, great grandchildren, her sister Elaine Shaffer, sister-in-law Shirley Ritchie, brother-in-law Darwin Goss and many nieces and nephews. “The LORD blesses his people with peace” Psalm 29:11

Clarice Ida Nicol (nee Schadewald) passed away peacefully at home on July 19th at the age of 96 years 3 months. A funeral service will be held on Saturday, July 24, 2021 at 11:00 am at St. Peter&#8217;s Evangelical Lutheran Church, Savanna Illinois.... View Obituary & Service Information

The family of Clarice Ida Nicol created this Life Tributes page to make it easy to share your memories.

Send flowers to the Nicol family.