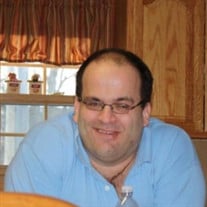 Christopher “Bubba” A. Duhme, age 45, of Preston, IA, passed away Thursday, March 26, 2020, at Select Specialty Hospital in Davenport, IA. A private family service will be held at Law Jones Funeral Home in Preston, IA. Burial will take place at St. Joseph’s Catholic Cemetery in Preston. A celebration of life memorial will be held at a later time. Memorials may be made to Chris’s family. Chris was born March 8, 1975 in Iowa City, IA, the son of Phyllis Duhme. He attended Preston Schools, graduating with the class of 1994. He later worked for B&G Auction with his Uncle Butch for a number of years. A sports fan through and through, Chris, or “Bubba” as he was affectionately dubbed by his high school teammates, was a proud member of his high school football team. In those days, he donned number 72 in honor of his favorite player, William “Refrigerator” Perry. He kept his love of sports throughout his life, always cheering on his Iowa Hawkeyes. But it wasn’t just the national sports, that kept his attention. Chris was proud of his community and had a passion for local athletics. He followed the Preston, and later Easton Valley teams, closely. He attended games whenever he could, and made sure he had a firm grasp on local scores and records. Even in his final days when his health took a turn for the worse, he made sure to stay informed, keeping track of the Easton Valley River Hawks boys basketball team’s record and coach Beck’s win total. Chris loved to keep up with other happenings, as well. He followed current events, and always seemed to know little nuggets of useful information. In his free time he enjoyed gaming and cooking. He would often ask his family for recipes or directions, so he could cook new meals. Chris will be dearly missed by his mother, Phyllis Duhme, of Preston, IA; sisters, Wendy (Larry) Noe, of Rowley, IA and Karry (Troy) Russell, of Saukville, WI; nieces and nephews, Brenna, Nathan, Anna, Carlee, and Case; and many more extended family members and friends. Chris is preceded in death by his grandparents and his brother, Patrick “Herbie” Duhme.

The family of Christopher A Duhme created this Life Tributes page to make it easy to share your memories.

Send flowers to the Duhme family.