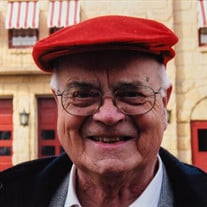 Charles Gordon Stevenson died at Stonehill Health Center, Dubuque, Iowa, on Saturday, January 23, 2021, at the age of 93. He loved God and people. Charles was born in Ottawa, Ontario on September 15, 1927, and grew up in Watertown, New York. Following high school graduation, he enlisted in the U.S. Army, served until 1947, and after being discharged, moved to Chicago with a buddy from his unit. There, he met Dolores Davidson, his angel, and they were married at Peace Memorial Church in Chicago on October 16, 1948. Charles worked in the transportation industry and in 1959, he and Dolores moved with their family to California where he worked in management at a shipping cooperative in northern California. In the mid-60s, Charles came to faith in Jesus Christ at a men’s fellowship group at the Ygnacio Valley Evangelical Free Church, in Walnut Creek, California. In 1975, Charles was transferred back to the Midwest and they settled in Wheaton, Illinois. Charles and Dolores retired to Galena, Illinois in 1996. Above all, Charles was a student of the Word and a man of prayer. He was an active member of the Ygnacio Valley Evangelical Free Church, the Wheaton Evangelical Free Church in IL, and the Galena Bible Church in IL. As he told a grandchild on his 80th birthday, I’ve lived forty years in darkness and forty years in the light. At 93, he completed 53 years walking in Christ’s light which shone clearly through him as he studied the Bible with and mentored many men, including some grandchildren and a son-in-law, over the years. With a keen wit and sense of humor, he brought fun and laughter to his family and friends; he was a voracious reader, loved birds and walks with grandchildren to see the sunset at the top of his drive. He was devoted to his wife and children and actively involved in the lives of his grand and great-grandchildren. He and Dolores celebrated 70 years of marriage in 2018 before she went to be with the Lord. Charles will be dearly missed by his loving family, his four children, James (Christine) Stevenson of Poplar Grove, IL, Laurel (Paul) Eshelman of Elizabeth, IL, Paul (Kim) Stevenson of Naperville, IL and Heather (Bob) O’Meara of Chicago, IL; his nine grandchildren, James (Debbi) Stevenson, Jason (Melissa Graf) Stevenson, Joshua (Debbie) Stevenson, Jennifer (Jonathan) Lauriat, Eliot (Jill) Eshelman, Alec (Kate) Eshelman, Hannah (Zach) Marshall, Caleb (Hannah) Stevenson and Nathanael (fiancée Susanna Eschbach) Stevenson; his eighteen great-grandchildren; his sisters Betty St. Pierre and Jenny (Jim) Burhans; and his brothers Bob Richner and Jim (Pat) Richner. Charles was preceded in death by his wife, Dolores; his mother, Charlotte Richner; and his sister, Belle Bickel. Due to COVID-19 a private family funeral service will be held. Friends and family may watch the service at https://www.facebook.com/groups/461937621505047 . In lieu of flowers, memorials can be given to Stonehill Care Center, which provided Charles excellent compassionate care, 3485 Windsor Avenue, Dubuque, IA 52001, or online, www.stonehilldbq.com.

Charles Gordon Stevenson died at Stonehill Health Center, Dubuque, Iowa, on Saturday, January 23, 2021, at the age of 93. He loved God and people. Charles was born in Ottawa, Ontario on September 15, 1927, and grew up in Watertown, New York.... View Obituary & Service Information

The family of Charles Stevenson created this Life Tributes page to make it easy to share your memories.

Send flowers to the Stevenson family.