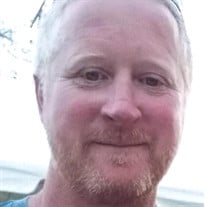 Charles B. Sipe, Jr., age 47, of Mt. Carroll, IL, passed away suddenly, Saturday, August 1, 2020. A funeral service will be held at 11:00am, Wednesday, August 12, 2020, at Law Jones Funeral Home in Mt. Carroll, IL. Visitation will take place Tuesday, August 11, 2020 from 4pm to 7pm at Law Jones Funeral Home in Mt. Carroll, as well as one hour prior to Wednesday's service. Burial will occur at the Sipe family cemetery in rural Mt. Carroll. Memorials may be given in Charlie’s honor to the Charles Sipe, Jr. Memorial Fund at the Savanna-Thomson State Bank. Charlie was born September 15, 1972, in Sterling, IL, the son of Charles, Sr. and Linda (Bender) Sipe. He graduated from Mt. Carroll High School with the class of 1990 and went on to Lincoln Tech, where he earned a certification in auto-diesel mechanics. Charlie went to work on the family farm for a bit then moved to Tennessee, where he met Tonya Castle. On March 8, 1995, the two were married. Charlie and Tonya then moved back to the Mt. Carroll area where they had two boys, Johnathan and Riley. Charlie went to work for Metform, Riverport Railroad (earning his engineer and conductor licenses), and John Deere. Though he worked a number of jobs throughout his life, his heart was always tied to the family farm, which he never left for long. On April 11, 2019, Charlie married Megan Smith. Between her daughter, Isabella, and their new baby daughter, Willow, Charlie welcomed two more children into his heart. Charlie was an avid outdoorsman. He loved to hunt (especially deer), and shared this love with his two boys. He also trapped, spent time (recklessly) enjoying four-wheelers, and butchered and smoked his own meats. But most of all, Charlie loved his family. His big heart is perhaps best represented by his registration as an organ donor. Though Charlie died too soon, his departure from this world will undoubtedly improve the lives of many, just as he would have wanted. Charlie will be dearly missed by his wife, Megan; children, Johnathan (Megan Gibbs) Sipe, of Elizabeth, IL, Riley Sipe, of Warren, IL, Isabella Smith of Mt. Carroll, and Willow Sipe, of Mt. Carroll; mother, Linda Sipe, of Mt. Carroll; sisters, Peggy (George) Grams, of Savanna, IL, Bobbie (Charles) Sipe, of Amboy, IL, and Stacie (Robert) Klein, of Mt. Carroll; brother, Donnie (India) Sipe, of Mt. Carroll; and former wife, Tanya Sipe, of Warren, IL. Charlie is preceded in death by his father, Charles Sipe, Sr.; niece, Lindsey Grams; nephew, Donald Sipe, and cousin, Carl Everett Sipe.

The family of Charles B. Sipe Jr created this Life Tributes page to make it easy to share your memories.

Send flowers to the Sipe family.