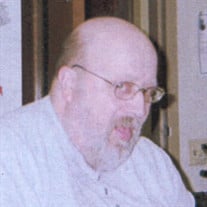 Charles Joseph O’Neal, age 68, of Savanna, Illinois, passed away Monday, November 30, 2020 at Generations at Neighbors, Byron, Illinois. A private family graveside service will be held at St. John’s Catholic Cemetery, Savanna. Charles was born June 17, 1952, the son of Lawrence “Bud” and Arlene (Belander) O’Neal in Savanna. He attended school in Toledo, Ohio. Charles did factory work in Toledo, and returned to Savanna in 1994 after his father passed. He then took care of his mother until her passing in 2013. In his younger years, Charles enjoyed riding motorcycles. He also enjoyed Saturday potlucks with friends, and especially loved taking “walks” with his friend, Nancy, in his scooter. Charles will be dearly missed by two sisters, Kathy (Ed) Majchszak, of Perrysburg, Ohio, and Tina (Brian) Lewandowski of Toledo, Ohio; a sister-in-law, Helen O’Neal of Toledo; two aunts, Mariann Meador of Lanark and Rosalyn Walston of Thomson, and a special friend, Nancy Handel of Savanna. He is preceded in death by his parents, Bud and Arlene; and three brothers, Michael, Dan and Dennis.

The family of Charles Joseph O'Neal created this Life Tributes page to make it easy to share your memories.

Send flowers to the O'Neal family.