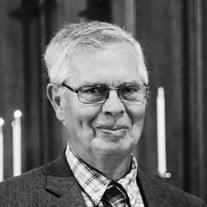 Charles Bredall, age 79, of Preston, Iowa, passed away Friday January 31st, at the Jackson County Medical Clinic in Maquoketa, Iowa. Cremation rites have been accorded. In line with Charles’ wishes a family gathering will be held at a later date. In lieu of flowers Charles family would like memorials to be made out to Boys Town of Omaha, Nebraska. Charles was born on his family’s farm north of Preston, August 22, 1940, to his parents Albert and Adeline (Miller) Bredall. Charles would go on to farm his family’s land until his retirement in 2003. He graduated from Preston High School in 1958. He then served in the Iowa National Guard. He worked at Nestle-Purina in Clinton, IA for 33 years. Charles married the love of his life, Amy, on June 29th, 1995, in Las Vegas, Nevada. He loved his step-children and grandchildren, treating them like his own. Charles was a Camanche Indians fan and would be at most games his grandchildren participated in. He also enjoyed the Chicago Cubs and Dallas Cowboys. Charles was a gentle man and treated everyone with kindness and respect. He has donated his body to University of Iowa Medical School. Charles will be dearly missed by his wife, Amy Bredall of Preston; his sister, Carolyn (Robert) Nicolaysen of Texas; one niece, Karen (David) Reed of Texas, and one nephew, Daniel (Janet) Nicolaysen of Texas; three step-children, Jay (Karen) Fett of Georgia, Bret (Kathy Schultz) Fett of Clinton, and Teri (Kory Atherton) Fett of Camanche; five grandchildren, Laci Fett of North Carolina, Brandon Fett of Tennessee, Bethany (Ryan) Dell of Clinton, Camaryn Carstensen, and Aubrey Carstensen of Camanche, two great-grandchildren, Chandler Warren, and Paisley Dell; Four great-nieces, and one great-nephew. Charles is preceded in death by his parents, Albert and Adeline Bredall

Charles Bredall, age 79, of Preston, Iowa, passed away Friday January 31st, at the Jackson County Medical Clinic in Maquoketa, Iowa. Cremation rites have been accorded. In line with Charles&#8217; wishes a family gathering will be held at a... View Obituary & Service Information

The family of Charles A. Bredall created this Life Tributes page to make it easy to share your memories.

Send flowers to the Bredall family.