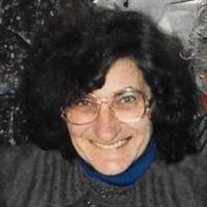 Carolyn A. Schreiner, age 76, of Thomson, IL, passed away August 20, 2020 at Select Specialty Hospital, in Davenport, IA. Cremation rites will be accorded and a Catholic Committal Service will take place at a later date. Family and friends are invited to share in Carolyn’s life at lawjonesfuneralhome.com. Carolyn was born March 10, 1944, in Savanna, IL, the daughter of Marshall and Helen “Dolly” (Wubben) Bork. She grew up in Mt. Carroll, IL and graduated from Mt. Carroll High School. She then married Randall Ewalt; they went on to have three children. A bit later in life, Carolyn married Marvin “Pepper” Schreiner. Together, with five children between them, the Pepper and Carolyn raised a family of seven. Carolyn spent a number of years working for Lutheran Social Services and the Watermelon Café, in Thomson, but her life’s most important work was that as a homemaker. She was a loving mother who adored her family. She was mostly a homebody, but that’s not to say that she remained solitary. Everything she enjoyed was made better with her beloved family at her side. Watching police dramas with her kids and grandkids, and teaching her grandchildren how to sew and cook always brought her happiness. Seeing as she had so much love to give, all of her grandchildren were convinced they were her favorite. “Grandma” was fond of saying, “my favorite is whoever I’m speaking to at the time,” then would sneak a wink to her real favorite. To this day, they all claim to be that on the receiving end of that wink. Carolyn will be dearly missed by four children, Ray Schreiner, of Jacksonville, FL, Rusty (Denise) Ewalt, of Clinton, IA, Rhonda Schreiner, and Marletta “Marty” Schreiner, of Thomson; five grandchildren, James Ewalt, Peggy Delargy, Tyler Delargy, Jordan Schreiner, and Madisyn Schreiner; two great-grandchildren, Graceyn and David; a sister, Shirley (Ron) Brashaw, of Mt. Carroll; and a brother, Marshall “Bud” Bork, of Mt. Carroll. Carolyn is preceded in death by her parents, Marshall and Dolly; husband, Marvin “Pepper”; daughter, Dori Schreiner; grandson, Daniel Robichaud; and sisters, Sharon sack and Cathy Bork.

Carolyn A. Schreiner, age 76, of Thomson, IL, passed away August 20, 2020 at Select Specialty Hospital, in Davenport, IA. Cremation rites will be accorded and a Catholic Committal Service will take place at a later date. Family and friends... View Obituary & Service Information

The family of Carolyn A. Schreiner created this Life Tributes page to make it easy to share your memories.

Carolyn A. Schreiner, age 76, of Thomson, IL, passed away August...

Send flowers to the Schreiner family.