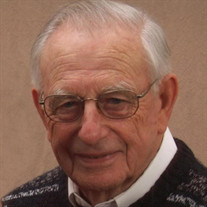 Carl Reifsteck, age 90, of Elizabeth, Illinois, passed away Thursday, October 29, 2020 at Big Meadows Nursing Home, Savanna. A Celebration of Life will be held on November 28, 2020, at 1 pm at St Paul’s Lutheran Church, 411 W Catlin Street, Elizabeth, IL. Carl was born September 24, 1930, in Hanover, Illinois, the son of Otto and Ora (Limage) Reifsteck. He attended Hanover Schools. Carl served in the US Army from 1950-1957. On July 23, 1965, Carl married Darlene; they celebrated 51 years of marriage until Darlene’s passing in 2017. Carl retired from the Savanna Army Depot after 38 years working in the maintenance department there. He spent much of his spare time tending to his garden and he took every opportunity to hunt and fish with his brothers and sons. His children and grandchildren were very special to him. He taught them how to enjoy the simple things in life. A game of marbles or cards were a way to spend an afternoon, a flyswatter war was the best fun and he taught them all that if you work hard you will succeed. He may have not always verbalized how proud he was of all of the kids and grandkids, but just a small gesture like a hug, handshake, or a nod of his head was his way of letting us know he was proud of all of us. He taught us that family sometimes went beyond the norm. He treated everyone like family. Carl will be dearly missed by his three sons, Clyde “Skip” Reifsteck of Minneapolis, Minnesota, Jeff (Pam) Reifsteck of Batesville, Arkansas, and Karl “Bud” Reifsteck of South Beloit, Illinois; daughter Kristine (Jeff) Spoerl of Elizabeth; 13 grandchildren, Rachel Kobischka, Rebecca (Adam) Vaiden, Evan (Rachael) Reifsteck, Hunter MacLaurin, Jordan (Hilda) Reifsteck, Ryan Reifsteck, Keifer Hatcher, Dylan Hatcher, Kaitlyn (Chris Builta) Reifsteck, Jacalyn Reifsteck, Madalyn Reifsteck, Miranda Koester and Adam Koester; and 10 great-grandchildren; Ty, Aiden, Grace, Pyper, Ariella, Teagan, Jocelyn, Maggie, Maddison and Jakson. Even if events moved you away from the family circle, you were still were part of Carl’s family, and he will be dearly missed by Kim (Michael Kresol) Reifsteck. Carl is preceded in death by his parents Otto and Ora; wife Darlene; sisters, Betty Hazer and Phyllis Miller; and four brothers, Clyde, Donald, David, and Edward.

The family of Carl Reifsteck created this Life Tributes page to make it easy to share your memories.

Send flowers to the Reifsteck family.