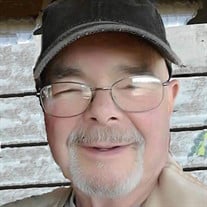 Calvin “Dick” Hamil, age 80, of Hanover, IL passed away on March 19, 2022 at his home, with his family by his side. A funeral service will be held Friday, March 25, 2022 at 12pm at Law Jones Funeral Home, in Hanover, with a visitation preceding it, from 10am to 12pm. Family and friends are invited to share in Dick’s life at lawjonesfuneralhome.com. Dick was born February 24, 1942 in Chambersburg, PA, the son of Harvey and Arlene (Shearer) Hamil. He attended grade school in Pennsylvania before living in France, then ultimately graduating from Hanover High School with the class of 1960. In 1961, Dick married Pearl Murphy in Panama. He went to work for Atwoods for a time, but retired from the Savanna Army Depot where he was an ammunitions instructor. Dick loved staying active in his younger and middle-aged years. Mountain biking, lifting weights, target shooting, and motorcycles kept him busy. He’d even take his son to rock concerts where he was often one of the older fans, but enjoyed them just the same. As he settled into his later years he found more and more enjoyment simply being home with his dear Pearl and his cats. He had a soft spot for animals and often would feed feral cats. He was a member of the Hanover United Methodist Church and the Free Masons. Dick is survived by his wife, Pearl; daughters, Victoria (Luke) Wiederholt, of Hazel Green, WI and Kristina Keck of Dubuque, IA; son, Gregory (Michelle) Hamil, of Winnebago, IL; nine grandchildren, Kailey, Lacie, Tanner, Cameron, Kierra, Jonathan, Noah, Brandon, and Chandler; seven great-grandchildren, Beau, Quade, Waylon, Journee, Jett, Delcie, and Maxon; and a sister, Trudy Miller, of Bettendorf, IA. Dick is preceded in death by his parents, Harvey and Arlene; sisters, Shirley (Eugene) Beaver and June Williams; brother-in-law, Robert Miller; in-laws Melba (Lee) Wolbers; and great grandson, Henry (infant).

The family of Calvin "Dick" Hamil created this Life Tributes page to make it easy to share your memories.

Send flowers to the Hamil family.