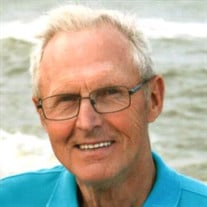 Burt’s life was centered around caring for and service to others, whether it was caring for his family and friends, or serving in his church and community. Burdette “Burt” Dauphin, age 71, of Savanna, Illinois passed away Monday, April 26, 2021 at FHN Memorial Hospital in Freeport. A funeral service will be held at 11:00 a.m., Saturday, May 1, 2021, outdoors at the First United Methodist Church, Savanna. Visitation will be held from 4:00 to 8:00 p.m., Friday, April 30, 2021 at Law-Jones Funeral Home, Savanna. The service will be available to watch on Facebook live by visiting Burt's group at: https://www.facebook.com/groups/907715219962071 Burial will take place in Savanna Township Cemetery with full military rites. Memorials may be made in his memory for local charities. Burt was born May 3, 1949 in Savanna, the son of Charles and Edna (Deuel) Dauphin, Sr. He grew up on the family farm, and attended Center Hill School and Savanna High School, graduating with the Class of 1967. In high school, Burt wrestled and played baseball. Burt enlisted in the US Army right after high school, serving in Vietnam. Burt became engaged to his future wife, Margaret “Peg” Malley, on Christmas Eve in 1968 when Burt was home on leave from the military. The two married on December 12, 1970. Together they celebrated 48 years of marriage, and raised three daughters, Elaine, Kristine and Marjorie. Peg passed away December 18, 2018. Burt began his Postal career in Freeport as a clerk. He worked his way up and eventually became a Postmaster serving in Lena and Savanna. Burt also helped lead other post offices in Rock Falls, Mt. Morris and Lanark throughout his career. He left his mark in Postal Service in northwest Illinois, retiring in 2007. Burt and Peg then went back to the family farm called Paradise Acres near Savanna, and began raising and caring for cattle as they made their life on the farm. Burt was a member of the First United Methodist Church in Savanna where he served on the board as a trustee. He was also a past member of the Savanna Rotary and Pearl City Lions Club. Burt and Peg were youth group leaders at Pearl City Methodist Church for several years. Burt and Peg welcomed several foreign exchange students into their home throughout the years. He also coached softball for his daughter’s teams. Burt was always ready to help others, passing this practice down to his daughters. He loved spending time with his children and grandchildren. Burt will be dearly missed by three daughters, Elaine (Rod) Howard of Dardenne Prairie, Missouri, Kristine (Jeffrey) Davidson of Boonsboro, Maryland and Marjorie (Dan) Volkers of Marengo, Illinois; 14 grandchildren; two sisters, Diana Chaplin of Baileyville and Gloria (Lyle Eichelberger) Roberts of Freeport; one brother, Charlie (Marcia) Dauphin of Savanna; a brother-in-law, Russell Malley of Mt. Carroll; and a special friend and companion, Kim Riley. Burt was especially proud to have fourteen grandchildren: Skylar, Kobe, Mila, and Kataleya Howard; Erika, Jakob and Rebeka Davidson; Taylor, Blake, Alyssa, Tess, Sarah Kate, Cody, and Lukas Volkers. Burt is preceded in death by his wife, Peg; both parents; and a brother in infancy, Jason Dauphin.

Burt&#8217;s life was centered around caring for and service to others, whether it was caring for his family and friends, or serving in his church and community. Burdette &#8220;Burt&#8221; Dauphin, age 71, of Savanna, Illinois passed away... View Obituary & Service Information

The family of Burdette "Burt" Dauphin created this Life Tributes page to make it easy to share your memories.

Burt’s life was centered around caring for and service to others,...

Send flowers to the Dauphin family.