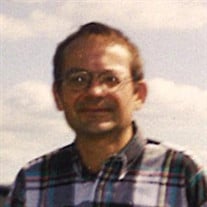 Brian James Krug, age 58, of Elizabeth, Illinois, formerly of Freeport, Illinois, passed away Monday August 10, 2020, peacefully at his brother and sister-in-law’s home after a year-long battle of cancer. To honor Brian’s wishes, private family services will be held at Trinity Lutheran Church, Derinda, Illinois. Cremation rites have been accorded. Brian was born on August 13, 1961 in Freeport, Illinois to Marvin and Carol (Mueller) Krug. He is a 1979 graduate of the Elizabeth High School. Brian attended Sauk Valley College in construction and technology. He graduated with the class of 1981. He held various construction jobs and up to a year ago was employed at ABM Onsite Services –Midwest Inc., now as PCI Services Inc. in Freeport. He was a long time member of Trinity Lutheran Church in Derinda. Brian enjoyed attending family and friends celebrations as well as family reunions. He had a strong faith that guided him throughout life. In the latter years, he enjoyed taking his parents on annual vacations. Brian will be dearly missed by his sister, Janice (Ronny) Appleby of Hazel Green, Wisconsin; brother Kevin (Patricia) Krug of Elizabeth, Illinois; six nieces and nephews: Timothy, Megan (Spencer Schwartz), and Stephanie Appleby; and Adam (Bridgette) Krug, Jacob and Jared Krug; two great nephews, Parker and Brennan Appleby, one great niece Nova Krug; two aunts, Nina Mueller and Glenda Mueller and their families. He is preceded in death by his parents Marvin and Carol Krug; niece Michele Appleby, and two uncles, Donald Mueller and Roger Mueller. The family would like to acknowledge the caring professionals at Monroe Hospital and Clinic, Hospice Care of America in Rockford, especially Marley, Melinda, Sue and Laura for their compassion and love as well as Brian’s brother and sister-in-law, Kevin and Trish, for welcoming Brian into their home during his final months.

The family of Brian James Krug created this Life Tributes page to make it easy to share your memories.

Send flowers to the Krug family.