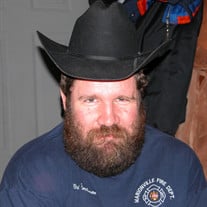 Brian Blackman, age 56, of Mt. Carroll passed away Tuesday, February 18, 2020 at the Alden-Park Strathmore Nursing Center in Rockford, Illinois, after a year of trying to come back from two strokes. Brian was born June 30, 1963 in Aberdeen, Maryland, the son of Donald Blackman and Betty Rausch. He had the opportunity to live in several different places when he was young, as the family followed his father’s military career. Through his life he lived in Maryland, Wisconsin, Germany, Arizona, Missouri, Kansas, and finally Illinois. His youngest brother and sister recall the days when they were little, and they used to sit on his feet, holding on to his legs as he would walk around the house and carry them along. He attended school in Whitehall, Wisconsin. Brian’s longest job was working at the Royal Dairy Farms in Garden City, Kansas, where he worked 14 years. It was here at the farm where his coworkers gave him the nickname “Big Bear”. One day at work he was watching as two men hoisted railroad ties, one-by-one. Brian wanted to help, and when the men turned around, Brian was carrying two railroad ties, one under each arm. The nickname stuck. Brian liked all kinds of music, watching Westerns, and driving his Dodge Dakota pickup. Brian will be dearly missed by his two brothers, Miles Blackman of Marionville, Missouri and Keith Blackman of Kempner, Texas; two sisters Sherri (Mike) Tresemer of Kent, Illinois and Christiene (Fran) Gable Jr of Mt. Carroll, Illinois; a step-mother Helen (Hoyt) Blackman of Garden City, Kansas; and two nieces and three nephews. Brian is preceded in death by his parents Donald and Betty. A memorial service will be held at Noon, March 21, 2020 at the Law-Jones Funeral Home, Mt. Carroll. Visitation will be held from 10:00 am until noon on March 21 at the funeral home. Memorials may be made to the American Diabetes Association.

Brian Blackman, age 56, of Mt. Carroll passed away Tuesday, February 18, 2020 at the Alden-Park Strathmore Nursing Center in Rockford, Illinois, after a year of trying to come back from two strokes. Brian was born June 30, 1963 in Aberdeen,... View Obituary & Service Information

The family of Brian Blackman created this Life Tributes page to make it easy to share your memories.

Send flowers to the Blackman family.