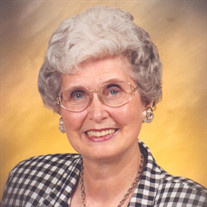 Betty Mae Decker, age 91, passed away at Sheboygan Senior Community on February 18, 2020 in Sheboygan, Wisconsin. She was born June 9, 1928 at the family home in Chadwick, Illinois. She was the daughter of William and Iva Leona Wires Wagner. The family moved to her grandparent’s home when Betty was in first grade. She graduated from the 8th grade at Pleasant Hill, a one room school and then the family moved into town. Betty graduated from Chadwick High School and was salutatorian of the class of 1947. She married Lee Hartman Jr. on December 31, 1947. They were blessed with two daughters: Connie and Cathy. Betty’s first job was at Stein’s Grocery Store. For many years, Betty worked at General Electric in Morrison and was promoted to an instructor position. She retired in 1988 and was on the Board at General Electric Credit Union. Betty volunteered on the Carroll Council of Aging, Meals on Wheels, and the American Ladies Auxiliary. She was an active member of Hope United Methodist Church in Chadwick. She later married Louis Decker on June 4, 1994. They enjoyed traveling in their motorhome across the county. They were members of a camping and square-dancing club. Louis built their retirement home at Rayburn Lake in Texas where they spent many winters together. Throughout her life, one of Betty’s greatest joys was spending time with her granddaughters. Betty was preceded in death by her daughter Cathy McNett of Wisconsin Rapids, WI and a nephew, Chuck Wagner. She is survived by one daughter; Connie (Ron) Brake of Watertown, WI; five granddaughters, Amber Brake of Phoenix, AZ, Abbey Brake of Madison, WI, Deidre (Tyler) Raulin of Sheboygan, WI, Melinda McNett of Pembroke Pines, FL, and Danielle (Chris) Spencer of Sussex, WI; great-grandson, Emmitt Raulin of Sheboygan, WI; stepson Phil (Sharla) Decker and three step grandchildren; Ryan, Kelly, and Kayla of Kansas City, MO. Betty was preceded in death by her two brothers; William Wagner and Stanley Wagner; one sister, Mabel Balk. She is also survived by several nieces; Carol Jane Strand, Rosemary Wagner, Susie Balk, Debbie Linder, Linda Miller, and Alice Beveroth; nephews, Darryl Apple, Andy Hartman, Allen Wagner, Tim Wagner, and Tom Wagner. In lieu of flowers, memorials can be made to the Hope United Methodist Church in Chadwick. A celebration and memorial of Betty’s life will be held at 11:00 a.m., Saturday, September 5, 2020 at the Hope United Methodist Church, Chadwick, with a visitation 30 minutes prior from 10:30 to 11:00 a.m.

Betty Mae Decker, age 91, passed away at Sheboygan Senior Community on February 18, 2020 in Sheboygan, Wisconsin. She was born June 9, 1928 at the family home in Chadwick, Illinois. She was the daughter of William and Iva Leona Wires Wagner.... View Obituary & Service Information

The family of Betty Mae Decker created this Life Tributes page to make it easy to share your memories.

Send flowers to the Decker family.