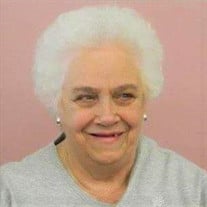 Barbara K. Marshall, of Sabula, IA, passed away Wendsday, January 12th, at MercyOne Medical Center in Clinton, IA. Funeral Service will be at 2:30 p.m. Sunday, January, 16th, at the Calvary Lutheran Church in Sabula. Visitation will be from 1:30 p.m. to 2:30 p.m. prior to the service at the church. Burial will take place in the Sabula Evergreen Cemetery. Barbara was born October 3rd, 1939, daughter of Edward and Alberta (Boock) Marburger. She grew up in Sabula, and graduated from Sabula High School with the class of 1957. Soon after graduation Barbara married her High School Sweetheart and love of her life, Wayne Marshall. Together, Barbara and Wayne raised four children and celebrated 25 years of marriage until Wayne's passing in 1983. In the 1970s Barbara and Wayne owned and operated the Riverview Tap in Sabula. Later the tap was purchased by Barbara's brother and renamed “Gar's Island City.” Barbara was a life long member of the Calvary Lutheran Church, and member of the VFW Auxiliary. Back in the day Barbara was also a member of the Sabula Firettes. Barbara was famous for her baking. Among her specialties were buns, carrot cakes, yeast rolls, and especially her fried bread. She always kept a tidy house, and taught her children the value of hard work by assigning chores such as washing windows, painting, and wallpapering. Barbara believed dinner time was time to be spent with family. She always had food on the table and insisted that the whole family gather and share a meal every night. Barbara quite enjoyed time spent with her friends, and visiting over coffee and cakes. Throughout her life She loved to go shopping with her daughters. The only thing on Barbara's radio was old country music. She especially liked Daniel O'Donnell and Willy's Roadhouse. At the center of Barbara's life was her family. She took great pride in her children, grandchildren, and great-grandchildren. Barbara will be dearly missed by her four children, Candi (Steve) Woodhurst of Sabula, Connie Marshall of Tipton, IA, Dave (Gail Ann) Marshall of Clinton, and Doug (Celia) Marshall of Georgia; six grandchildren, Tony Woodhurst of Sabula, Tory (Lindsey) Woodhurst of Sabula, Ryan (Jessica) Marshall of Tipton, Mandy (Corey) Marshall of Fulton, IL, Tyler (Brittany) Marshall of Georgia, and Austin Marshall of Georgia; three great-grandchildren, Hailee, Camalyn, and Collin; six siblings, Bonnie (Jerry) Greve of Manchester, IA, Richard “Ike” (Carole) Marburger of Sabula, Robert “Boober” (Mary) Marburger, Gary (Penny) Marburger of Ottumwa, IA, Thomas “Hans” (Sandy) Marburger of Davenport, IA, and Ronald “Dean” (Janet) Marburger of Alabama; sister-in-law Leone (John) Marburger of Sabula, and many nieces and nephews. Barbara is preceded in death by her husband, Wayne; parents, Edward and Alberta; brother, John “Pete” Marburger; sister-in-law Mary Marburger; and brother-in-law Jerry Greve.

Barbara K. Marshall, of Sabula, IA, passed away Wendsday, January 12th, at MercyOne Medical Center in Clinton, IA. Funeral Service will be at 2:30 p.m. Sunday, January, 16th, at the Calvary Lutheran Church in Sabula. Visitation will be from... View Obituary & Service Information

The family of Barbara K. Marshall created this Life Tributes page to make it easy to share your memories.

Send flowers to the Marshall family.