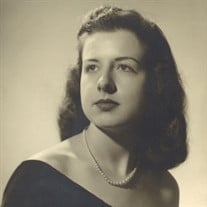 Barbara L. Hamilton, age 94, of Miles, passed away Thursday, December 10th, at Jackson County Regional Hospital. Burial will be held at a later date. In lieu of flowers donations may be made to Feeding America or your local food bank. Barbara was born August 9th, 1926, on the family farm. She is the daughter of LD “Dewey” and Mildred (Morgan) Jones. She graduated from Cotter Consolidated High School with the class of 1943. After high school Barbara attended the University of Iowa, and graduated with a degree in business in 1948. While at University Barbara joined the Alpha Delta Pi Sorority. After college Barbara married the love of her life, Carroll Hamilton. The couple raised four children and celebrated 52 years of marriage until Carroll’s passing in 2002. For much of her life Barbara taught. She was a teacher at school and a teacher at home. She began her career teaching short hand and accounting at Lanark High School in Lanark, IL. After meeting her husband she began to teach at Miles. Barbara took a break from teaching in order to raise her children, but it wasn’t long before she was back in school. When her children had grown Barbara began teaching 5th grade at Northeast. She continued at Northeast for over 20 years. Her many students are scattered throughout the area, and all have a story about the wonderful Mrs. Hamilton. Barbara loved to read. From fiction to non-fiction it didn’t matter, as long as the book piqued Barbara’s interest. She was also quite the musician. While in college Barbara played trombone in the University of Iowa Marching Band. Later in life Barbara played piano and organ at the United Methodist Church in Miles. The family’s talent for music has been passed down through her son, Tom, who continued with trombone, piano, and singing. Barbara was active in the Miles community. She was a member of the United Methodist Church and the church’s Woman’s Circle, as well as Jackson County Retired Teachers. Barbara was also a member of Eastern Star and the Miles American Legion Auxiliary for over 50 years. She loved her family and her dog Scottie. Barbara taught her loved ones patience and kindness, traits they will carry with them for generations to come. Barbara will be dearly missed by her four children, Jane Kedley of DeWitt, IA, Cathy “Kayt” Walters of Southern Pines, NC, Tom Hamilton of Cincinnati, OH, and Mary Hamilton of Miles; five grandchildren, Leah Rothman of Anthem, AZ, Brian Kedley of Venice, FL, and Hanna, Olivia and Emma Walters; two great-grandchildren whom Barbara loved dearly, Jackson and Josslyn Rothman. Barbara is preceded in death by her loving husband Carroll, and her sister Marian Endean

Barbara L. Hamilton, age 94, of Miles, passed away Thursday, December 10th, at Jackson County Regional Hospital. Burial will be held at a later date. In lieu of flowers donations may be made to Feeding America or your local food bank. Barbara... View Obituary & Service Information

The family of Barbara L. Hamilton created this Life Tributes page to make it easy to share your memories.

Send flowers to the Hamilton family.