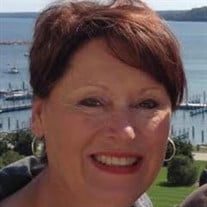 Audrey Davey Kindred, age 65, loving Wife and Mother, passed away Friday, March 20, 2020 at home, after a courageous battle with cancer. A private family service will be held with inurnment in the Evergreen Cemetery, Sabula, Iowa. The family will hold a celebration of Audrey’s life at their home at Lake Delhi in the summer. Memorials may be given in Audrey's honor to the Nebraska Children's Home Society, 4939 S 118th St, Omaha, NE 68137. Audrey was born February 26, 1955 in Lyons, Illinois to Howard and Marion Estelle (La-Zolla) Davey. She graduated from Morton West High School with the Class of 1973. Audrey met the love of her life, Ben Kindred, while working at the same company. Audrey and Ben were married September 12, 1987 in the Methodist Church at Sabula, Iowa. They raised their daughter, Amanda, and celebrated thirty-two years of marriage. Audrey cherished her family. She saw it as her duty to keep Ben “in-line,” and could do it with just a look. Her beauty attracted Ben, but the friendship they had made, propelled their marriage to be great. In the last few years, Audrey became a talented angler, as she and Ben enjoyed time together on Delhi Lake. Amanda describes her Mom as being independent, creative and artistic, understanding and supportive, and a real friend. When Amanda was young, Audrey became a homemaker in order to give Amanda the best upbringing. They would often share funny things about life, Audrey was famous for laughing until she would cry. Besides being a homemaker, Audrey had worked as an Administrative Secretary for Burns Security in Naperville and an Executive Secretary at Con Agra Foods in Omaha. In 2005, Audrey and Ben made Lake Delhi their getaway, until making it their permanent home in 2013. In her spare time, Audrey enjoyed sewing and craft work, she made sure to pass those skills down to her daughter. Audrey’s memory will be cherished by her husband, Ben of Lake Delhi, Iowa; her daughter, Amanda Kindred of Des Moines, Iowa; extended family and many friends. She is preceded in death by her parents and a brother.

Audrey Davey Kindred, age 65, loving Wife and Mother, passed away Friday, March 20, 2020 at home, after a courageous battle with cancer. A private family service will be held with inurnment in the Evergreen Cemetery, Sabula, Iowa. The... View Obituary & Service Information

The family of Audrey Davey Kindred created this Life Tributes page to make it easy to share your memories.

Send flowers to the Kindred family.