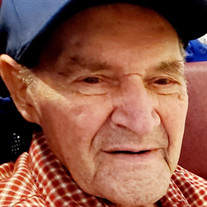 Arthur G. Getz, age 83, of Savanna, IL, passed away Monday, April 19th, at Winn Prairie Assisted Living Center, in Freeport, IL. A funeral service will be held at 11:00 a.m. Saturday, April 24th, at the Law Jones Funeral Home in Savanna. Visitation will be held from 9:00 a.m. to 11:00 a.m. Saturday, prior to the service. Art was born February 16th, 1938, in Savanna, son of George and Edna (Lambert) Getz. As a child, Art found a love and talent for roller skating. He was quite talented, and would spend much of his time at the Savanna roller rink showing off his moves and tricks. Art attended Savanna school systems. Soon after finishing school Arthur met the love of his life, Eleanor Michael. Art and Eleanor married on August 11th, 1957. They raised four children and celebrated 63 years of marriage. Art was a hard worker. He had many careers, at different times working for the railroad, Burgess Battery, a cheese factory, as well as farming. Art may be most well known for being the head custodian for all Savanna schools for over twenty years. He took pride in his work, and it showed. Art retired from the Savanna school district in 2003. Art was great when it came to working with his hands. He could fix anything, or at least make it run. He loved working on cars, and was particularly proud of his 1931 Pontiac, that he would tinker on for most of his life. Art shared his handyman talents with everyone. If you needed something fixed, or needed work done on your car, Art would do it for free and then invite you inside for dinner. Arthur also loved the farm life and the outdoors. He enjoyed camping and traveling with his wife and family, and especially boating on the river. Art’s greatest love was his family. He delighted in being a grandfather for his 8 grandchildren. He took them on many adventures, be it creek stomping or morel hunting. He made sure each of his grandkids explored the Maquoketa Caves and had the chance to visit the fish hatchery. Art lived by the saying “For family, the doors always open.” He taught his family to give and love unconditionally. His loved ones will hold this virtue dear for generations to come. Art will be dearly missed by his loving wife, Eleanor; two daughters, Deanna (Craig) Hessenius of Freeport and Doreen (Matt) Adlfinger of Milan; 8 grandchildren, Jennifer (Josh) Machande, Patrick (Jessica) Getz, Christopher (Mary) Hiher, Alicia Bean, Lindsay Hoffman, Mary (Ty) Balduf, Ethan (Emily) Adlfinger, and Lucy Adlfinger; and three great-grandchildren, Thomas, Kelvin, and Sadie. Arthur is preceded in death by his two sons, Richard and Dennis, and great-grandchild, Sammy.

The family of Arthur G. Getz created this Life Tributes page to make it easy to share your memories.

Send flowers to the Getz family.