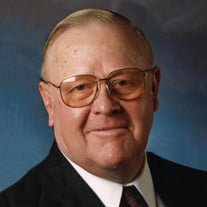 Arnold J. Sikkema, age 88, of Thomson, Illinois passed away Thursday, August 27, 2020 at MercyOne Medical Center, Clinton, Iowa. A Celebration of Life Service will be held 2:00 p.m. Saturday, September 5, 2020 at the Community Reformed Church, 747 N. 12th St., Clinton, Iowa, followed by inurnment in the Lower York Cemetery, Thomson, with full Military Rites by the Thomson American Legion. Visitation will be held two-hours prior to the service at the Church, from 12:00 noon – 2:00 p.m. Saturday, September 5, 2020. Masks are required. Memorials may be given in Arnold’s honor to the Church, or the Thomson American Legion. Arnold was described as a caring, sweet, gentle, and Christian man. Throughout his entire life, he cared for his family and friends in the same way that God cared for him. He was born at home July 28, 1932 in Garden Plain Township, Whiteside County, the son of Joe J. and Gertrude (Wilkins) Sikkema. When Arnold was twelve his parents moved their family near the Thomson bluffs, where they farmed for the F.J. Stransky Farm. Arnold attended the Sandridge Country School, then graduated in 1950 from the York Community High School, Thomson. After high school, Arnold kept busy helping on the farm, mostly milking cows, raising cattle, hogs, chickens, and crops to keep them all fed. During this time, Arnold met the love of his life, Roberta L. Williams, who was a senior graduating from York Community High School. As they got to know each other, they found they made a good team. Arnold enlisted in the US Army and served at Camp Chaffee at Fort Smith, Arkansas and Fort Carson, Colorado learning and applying his mechanical skills. Upon his return home after his service, Arnold and Roberta were married on October 12, 1956 in the Methodist Church in Thomson. They raised two children and celebrated sixty-three years of marriage. Arnold and Roberta continued the family’s work by farming the Stransky Farm for eighteen years, until 1974, when Arnold took a job at Chemplex in Clinton, Iowa. He was a good fit at Chemplex, as he could use his mechanical background. Arnold retired in 1994 and was able to spend time in his garden and yard, as he still enjoyed working with the earth. He was a member, and past Deacon at the Community Reformed Church of Clinton, Iowa, and a member of the Thomson American Legion. Arnold always looked forward to putting-out flags at the cemetery in honor of his fellow veterans on Memorial Day. Arnold will be dearly missed by his wife, Roberta of Thomson; his son, Bradley J. (Michelle) Sikkema of Bryant, Iowa and his daughter, Marcia L. (Jeff) Roeder of Galena, Illinois; four grandchildren, Mara (Joel) Welsh, Addison VanBuer, Brandon (Abbey) Sikkema and Levi Sikkema; two great-grandsons, Roman and Maddox; a brother, Willis E. (Lois) Sikkema of Erie, Illinois; and a brother-in-law, William Stadt of Rockford, Michigan. Arnold is preceded in death by his parents; a sister, Wilma Jean Stadt; and a brother, Robert (June) Sikkema.

The family of Arnold J. Sikkema created this Life Tributes page to make it easy to share your memories.

Send flowers to the Sikkema family.