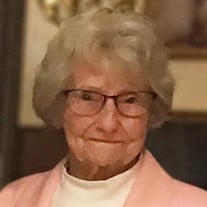 Arlene Faye Starr, age 90, of Thomson, IL, passed away in her home, with her family by her side on Tuesday, November 10, 2020. A private family service will be held in her honor on Saturday, November 14, 2020. Burial will take place at Lower York Cemetery, in Thomson. Family and friends are invited to share in Arlene’s life at lawjonesfuneralhome.com. Arlene was born November 20, 1929, in Thomson, IL, the daughter of Lee and Mary (Grawe) Potter. She attended Sandridge School in Thomson, then later, Lanark schools. After high school she began working at Starr Café, where she would meet her future husband, Kenneth Starr. On August 29, 1960, the couple were married, and went on to raise six children. Arlene soon settled into the role of homemaker; a role at which she excelled. Her entire world was centered around her family. She took great pride in filling the hearts, and bellies, of those she loved. Arlene was a fantastic cook, who cherished family gatherings. Even as her children grew and became occupied with their own families and commitments, Arlene wasn’t going to let that stop her from feeding them. She’d routinely have hot cooked meals ready to be picked up, if her kids or grandkids were too busy to stay and eat. Arlene was a natural caregiver who simply loved raising and caring for her children. This of course, extended to her grandchildren and great-grandchildren as they came into this world. Her generous and caring spirit was not only limited to her family. Arlene would regularly care for and babysit the children of her friends and fellow community members. She was a giver whom you could always count on to be there for you. As her family grew and grew over the years, Arlene maintained her role as matriarch of the family. Her children lovingly described her as the family headquarters; always coordinating schedules and making sure everyone was kept in the loop, when it came to family news and achievements. When she wasn’t consuming herself in the thing she adored most (her family), she could often be found tending her flower gardens. Arlene will be dearly missed by her husband Ken; five children, Richard (Kay) Shear, of Thomson, IL, Cheryl Temple, of Evansdale, IA, Steve (TerryAnn) Starr, of Thomson, IL, Cathy (Marv) Green, of Mt. Carroll, IL, and Theresa (Chas) Hermann, of Naples, FL; daughter-in-law, Linda Starr, of Thomson, IL; 11 grandchildren; 16 great-grandchildren; and 8 great-great-grandchildren. Arlene is preceded in death by her parents; eight siblings; son, Randy; and infant daughter, Kimberly.

Arlene Faye Starr, age 90, of Thomson, IL, passed away in her home, with her family by her side on Tuesday, November 10, 2020. A private family service will be held in her honor on Saturday, November 14, 2020. Burial will take place at Lower... View Obituary & Service Information

The family of Arlene Faye Starr created this Life Tributes page to make it easy to share your memories.

Send flowers to the Starr family.