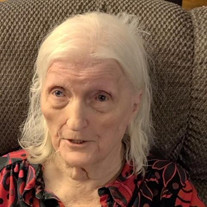 Arlene A. Anderson, of Mt. Carroll, IL, formerly of Henderson, NV, passed away Sunday, June 5, at Pleasant View nursing home. A memorial service will be held at 6:00 p.m. on Friday, June 10, at the Berreman Church in Mt. Carroll, with a meal to follow. Burial will take place at a later date in Las Vegas, NV. Arlene was born January 2, 1935, daughter of Joseph and Zerelda (Hoopes) Allred. She grew up in Mt. Caramel, UT, and attended Mt. Caramel schools. It was in Mt. Caramel when Arlene met the love of her life, Kenneth Anderson. Ever since they met, their lives were like a love story. Arlene and Ken married on June 4, 1953. Together, they raised three children, and celebrated 44 years of marriage, until Ken’s passing in 1997. After they married Arlene and Ken moved to Henderson, where they started their family. She gave her kids a “Leave it to Beaver” childhood. Her and ken were great parents, and took pride in their children and their achievements. Her kids never wanted for anything. In Henderson, Arlene ran the kitchen at Burkholder Jr. High School for more than 30 years. She was a great cook at home too, making any dish an instant classic. Every year for Christmas, she would give her loved ones a basket of homemade baked goods. The treats would never last long. Arlene took great pride in a clean home, and a well maintained yard. She was the envy of her entire block, and lived up to the phrase “keeping up with the Andersons.” Arlene’s faith was central to her life. She was a lifelong member of the Church of Latter Day Saints, baptized when she was eight years old. She was an active member of her church community, and a part of the churches Relief Society. Arlene will be dearly missed by her son, Glen (Sophia) Anderson of Mt. Carroll; grandchildren, Cynthia Rose, Michael Kenneth, and Jeffery Alan, all of Henderson; six more grandchildren; and two step-grandchildren, K.C. Phelps, and Shain Phelps, both of Mt. Carroll. Arlene is preceded in death by her loving husband, Kenneth Probart Anderson; two children, Kaylene Anderson Faccito, and Kenley Brian Anderson; and her many brothers and sisters.

Arlene A. Anderson, of Mt. Carroll, IL, formerly of Henderson, NV, passed away Sunday, June 5, at Pleasant View nursing home. A memorial service will be held at 6:00 p.m. on Friday, June 10, at the Berreman Church in Mt. Carroll, with a meal... View Obituary & Service Information

The family of Arlene A. Anderson created this Life Tributes page to make it easy to share your memories.

Arlene A. Anderson, of Mt. Carroll, IL, formerly of Henderson,...

Send flowers to the Anderson family.