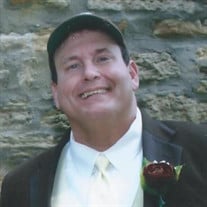 Anthony Boffo, age 59, of Albany, Illinois, passed away Tuesday, April 28, 2020 at Big Meadows Nursing Home in Savanna, Illinois. Burial will take place in Savanna Township Cemetery, with a memorial service to be held at a later date. Tony was born April 20, 1961, the son of Richard and Carol (Bates) Boffo. He married Ann Kelsey in 1983. Together they had two children, Desiree and Dominique. He later married Rachel Cooper in 2006, and had three more children, Bethany, Jonathan and Rebekah. Anthony (Tony)Robert Boffo “The Big Guy” was a man of many hats both literally and in his many career paths and interests. Tony worked as an Ammunition inspector at Savanna Army Depot and Naval Surface Warfare Crane Division in Bloomington IN. He also worked as a landscaper and was often spotted pushing 2 mowers at the same time. He was also worked as a Security Officer for Exelon Nuclear, Bank of American and New Testament Baptist Church in Miami Florida. As a young man Tony showed a great aptitude for Football. He played as an offensive lineman at Florida Air Academy and was recruited to play for the University of Dubuque. After college Tony received tryout requests from the Atlanta Falcons, Cincinnati Bengals and Tampa Bay Buccaneers. Tony also had success in competitive Power Lifting winning several regional and state competitions. He was able to Bench Press of 405, Squat 660 and Deadlift 611 in competition. At one time held two Illinois State records. Above all Tony was a man of Faith. He loved God and honored the scripture. This is how he shaped his life. He loved and was loved by his church New Testament Baptist, who will miss him dearly. Tony was a large and muscular man and could be intimidating, all of that faded away when he gave you a smile and shook your hand. He was a kind man who always made a point to say hello to everyone he met or passed on the street. Tony will be dearly missed by his mother, Carol, of Ocala, Florida; his wife, Rachel, of Miami, Florida; five children, Desiree (Andrew) Drinkall of Albany, Illinois, Dominique (Alex) Kaufman of Clinton, Iowa, and Bethany, Jonathan and Rebekah Boffo, all of Miami, Florida; five grandchildren, Kaleb, Lilliana, Grayson, Samuel and Lorelai; “honorary siblings”, Jeff (Serena) Lowman, Robert (Diane) Lowman and Kellyi (Ron) Bennett; as well as several extended family members. Tony is preceded in death by his father, Richard.

The family of Anthony (Tony) Robert Boffo created this Life Tributes page to make it easy to share your memories.

Send flowers to the Boffo family.