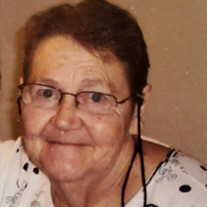 Ann L. Lincicum, age 79, of Hanover, IL, passed away in her home during the early morning hours of Friday, February 21, 2020. Cremation rites will be accorded. A private graveside will take place at Lost Mound Cemetery in Hanover, IL, on Saturday, June 6, 2020. A memorial fund has been established in Ann’s name. Family and friends are invited to share in Ann’s life at lawjonesfuneralhome.com. Ann was born January 22, 1941 in Savanna, IL, the daughter of Forrest and Frieda (Dauphin) Adams. A lifelong resident of Hanover, she attended Hanover schools from grade school through high school. It was there, she met Cleland Altfillisch. The two were married and had four children together. Following Cleland’s untimely passing, Ann married Harold Lincicum, and had two more children with him. The two were married until Harold’s death. Ann always contributed to her and Harold’s family farm, but as his health suffered, she took on an even more prominent role. She wasn’t one to shy away from hard work and responsibility. A true “helper,” Ann devoted more than 30 years of her life to the Elizabeth Nursing Home. Spending long days caring for others, is work that not everyone is cut out for, but Ann did it with grace, love, and compassion rivaled by few. And she didn’t let this service end simply by clocking out. For the better part of three years, Ann would wake up at 3am to visit her elderly mother and father. She would cook them breakfast and help them start their day, before arriving to her shift at the nursing home at 4:30 am. Throughout the day she’d for-go her breaks so that she could take a long lunch hour, in order to stop by and prepare lunch for her parents. Then immediately following her shift, she return to parents home once more, to prepare dinner. It is easy to see that Ann valued family above all else. When she found time for herself, she enjoyed tending to her vegetable garden, and caring for her pigs on the old family farm. Ann was a caring and loving grandma who took pride in her grandbabies. Ann enjoyed spending time with her family and she enjoyed the laughter of her family. Ann is survived by five children, Frieda (Joe) Paul, of Edgewood, IA, Edward Altfillisch, of Hanover, IL, Susan (Randy) Nobis, of Warren, IL, Diane (Jeff) Walker, of Rockford, IL, and Forrest Lincicum, of Hanover, IL; eight grandchildren, Frieda (Melanie Funk) Paul, Heather Paul, Matt (Cami) Altfillisch, Charles Nobis, MarySue Nobis, Tiffany (Sean) Phelps, Jeffrey Walker, and Forrest Lincicum; six great-grandchildren, Carlee, Brentlee, Alayna, Noah, Luca, and Ezra; and a brother-in-law, Carl Brock. Ann is preceded in death by her parents, Forrest and Frieda, husbands, Cleland Altfillisch and Harold Lincicum, sister, Mary Brock, and son, Harold Lincicum Jr.

Ann L. Lincicum, age 79, of Hanover, IL, passed away in her home during the early morning hours of Friday, February 21, 2020. Cremation rites will be accorded. A private graveside will take place at Lost Mound Cemetery in Hanover, IL, on Saturday,... View Obituary & Service Information

The family of Ann Lincicum created this Life Tributes page to make it easy to share your memories.

Send flowers to the Lincicum family.