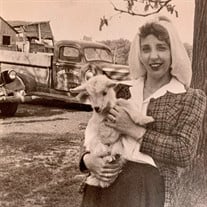 Anita M. Chamberlain, age 99, passed away Monday, October 12th, at Galena Stauss Nursing Home in Galena, IL. A graveside funeral service will be held at 2:00 p.m. Monday, October 19th, at Evergreen Cemetery in Hanover, IL Anita was born January 4th, 1921, daughter of Erwin and Bertha (Reppert) Johnson. As a young woman Anita met the love of her life, George Chamberlain. Together, they became wed on April 13th, 1940. The couple raised one son, and celebrated 58 years of marriage, until George’s passing in 1998. Anita was a proud mother and wife, most of all enjoying time with her family and friends. Anita will be missed by her son, Robert Chamberlain Sr. of Galena, IL; three grandchildren, Robert Chamberlain Jr. of Mineral Point, WI and Kimberly Erb of Montgomery, AL, and Sidra Cutts-Byrne of Milwaukee, WI; and two great-grandchildren, Ethan, and Alex. Anita is preceded in death by her husband, George; parents, Erwin and Bertha; and her Siblings, Melvin, Vernon, and Lorraine.

The family of Anita M. Chamberlain created this Life Tributes page to make it easy to share your memories.

Send flowers to the Chamberlain family.