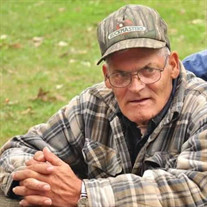 Andrew “Gump” Green, Sr., age 69, of Savanna, IL, passed away Friday, April 24, 2020 at MercyOne Clinton. Public visitation will be held Tuesday, April 28, 2020 at Law Jones Funeral Home in Savanna, IL from 5pm to 7pm. We ask that attendees please remain in their vehicles until ushered into the building by Law Jones staff, in order to adhere to current rules and guidelines. A private funeral service will be held on Wednesday, April 29, 2020, with burial at Albreicht Cemetery. Andrew was born April 15, 1951, in Savanna, IL, the son of Lyle and Lorena (Johnson) Green. He attended Savanna schools. Following high school, Andrew went to work for the Milwaukee Railroad, serving on his father’s crew. He later worked nearly 20 years for Breuning’s Livestock, then on to Twin Pond Farm for an additional 20 years. Andrew was truly a family man. He would often spend his days making the rounds to his family, spread throughout the area, stopping in to check on his favorite people. He kept up on all their lives, and time spent with his children and his grandson, brought him the most joy, in life. In his free time, he enjoyed the outdoors. He’d hunt and fish when the opportunity presented itself, hunt for morels every season, and for years, treasured time spent playing horseshoes with his father and brothers. If you found him inside he was probably watching a John Wayne movie, or working on a puzzle. Andrew will be dearly missed by his mother, Lorena Green, of Savanna, IL; wife, Mary Green, of Thomson, IL; son, Andrew (Jamie) Green, Jr., of Mt. Carroll, IL; grandson, Jenson Green; three step-sons, Steven (Michelle) Fredericks, of Savanna, IL, Robert (Veronica) Fredericks, of Mt. Carroll, IL, and Jason (Angela) Harris, of Savanna, IL; step-grandchildren, Isabella & Zoe, and Sidney & Saphire; five brothers, William (Donna) Green, of Massbach, IL, Lyle (Mary) Green, of Elizabeth, IL, Enoch (Ramona) Green, of Elizabeth, IL, Tony (Vicki) Green, of Savanna, IL, and Randy (Jennifer) Green, of Elizabeth, IL; and two sisters, Bonnie Howard, of Mt. Carroll, IL and Laurie (James) Kehl, of Massbach, IL. Andrew is preceded in death by his father, Lyle; brothers, Russell, Ray, and Danny; sister-in-law, Debra; and nephew, Brian.

The family of Andrew T. Green Sr. created this Life Tributes page to make it easy to share your memories.