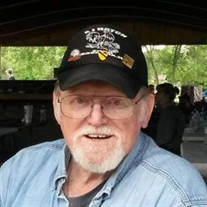 Allen B. Clarkson, Sr., age 78, of Savanna, IL, passed away February 6, 2022 at University of Iowa Hospital, in Iowa City, IA. A memorial visitation will be held Thursday, February 10, 2022 from 4pm to 7pm at Law Jones Funeral Home, in Savanna. Military honors will take place at 4pm. Family and friends are invited to share in Allen’s life at lawjonesfuneralhome.com. Allen was born October 17, 1943 in Medford, WI, the son of Louis and Verna (Anderson) Clarkson. He attended Medford school. He left high school early to enlist in the United States Army, serving in Korea and Japan. On October 17, 1964, Allen married Rosina Wurster at Saint Peters Evangelical Lutheran Church, in Savanna. Allen went to work for Burlington Northern Railroad as a foreman as he and Rosina made a life for themselves in Savanna; raising two children. He later worked for the Milwaukee Railroad as a welder in the rip yard. Following his retirement, Allen volunteered his time driving a van and serving as a scheduling coordinator for the Disabled American Veterans for decades. Allen was a jack of all trades type with many skills, interests, and hobbies. He enjoyed wood working, making his own wines, and buying and selling cars with his good friend Jeff Anderson. He was the type of man to always have a project to work on, or a friend to help. He loved to meet new people through his different endeavors, and was a proud member of the Veterans of Foreign Wars and the American Legion. Allen will be dearly missed by his wife, Rosina; son Allen Clarkson, Jr., of Bowling Green, KY; daughter, Rhonda Clarkson, of Savanna, IL; two grandchildren, Devin (Lexis) Clarkson and Allen (Cheyenne) Clarkson, both of Bowling Green, KY; and a great grandchild, Ezra W. Clarkson, of Bowling Green, KY; a brother, Harvey (Johnnie) Clarkson, of Georgia; and two sisters, Doris (John) Nephew, of Michigan and Diane (Glen) Abbot, of California. Allen is preceded in death by his parents, Louis and Verna; father-in-law and mother-in-law, Paul and Pauline Rice; brothers, Ben Clarkson, Jerry Clarkson, Richard Clarkson, and Lloyd Clarkson; sisters Janet (Bob) Giddings and Marsella (Louis) Mathias; brothers-in-law, Elmer Wurster and Wayne Wurster; and sister-in-law, Allice Clements.

Allen B. Clarkson, Sr., age 78, of Savanna, IL, passed away February 6, 2022 at University of Iowa Hospital, in Iowa City, IA. A memorial visitation will be held Thursday, February 10, 2022 from 4pm to 7pm at Law Jones Funeral Home, in Savanna.... View Obituary & Service Information

The family of Allen B. Clarkson Sr. created this Life Tributes page to make it easy to share your memories.

Send flowers to the Clarkson family.