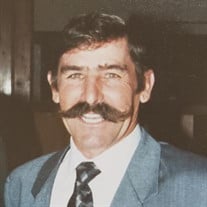 Alfred Patrick “Pat” Wild, and his unforgettable mustache, of Hanover, Illinois, passed away Tuesday, August 18, 2020 peacefully at home in the care of his loving family. A Funeral Mass will be held 10:00 a.m. Saturday, August 22, 2020 at St. John the Evangelist Catholic Church in Hanover. Visitation will be one hour prior to the Mass from 9:00 – 10:00 a.m. at the Law-Jones Funeral Home, Hanover. Burial will be in Evergreen Cemetery with full military rites. Social distancing and masks are recommended. Pat was born March 17, 1942, in Stockton, Illinois, the son of Hans and Margaret (Barron) Wild. He attended Hanover Schools and grew up working on the family farm. He enlisted in the US Army in 1961, serving at Fort Carson, Colorado where he enjoyed hunting in his spare time. On December 3, 1966, Pat married DeeAnna Bettcher. They raised a daughter near Hanover and celebrated 53 years of marriage. As a young man, Pat worked on the Railroad in Clinton, Iowa with his brothers. He was a farmer, drove a truck, worked several years as a carpenter, and a heavy equipment operator for Local 150. He loved landscaping with his bulldozer. Pat enjoyed Euchre Club and working on old tractors. He was proud of building his own home. Pat appreciated the “old way of doing things” and the good friendships he made as he helped organize thresher shows near Hanover. Pat’s “wild” side showed as he liked hunting rattlesnakes in South Dakota with his nephews, and racing motorcycles in younger years. He was an adventurer, whether he was on the Mississippi or riding in a rodeo. He was the type of person that when you met him, you would never forget him. You might find Pat repeating his favorite John Wayne quote, or even listening to classical music like Pavarotti. Pat will be dearly missed by his wife DeeAnna Wild of Hanover; his daughter, Dina (fiancé Charlie Henkins) Wild of Hanover; one granddaughter, Shaylee Wild; his brother Herman Wild of Hanover; three sisters, Alberta Wild, Nellie (Nick) Bainbridge, and Donna Eadie, all of Hanover; four sisters-in-law, Lynn Wild and Bev Paisley, both of Stockton, Mary Wild of Hanover and Carol Palmer of South Dakota; and many nieces and nephews. Pat is preceded in death by his parents; five brothers, Fred, William, Michael, Tom, and John (Sally) Wild; two sisters, Mary Wild and Margaret (Dale) Service; and two other brothers-in-law, Lynn Eadie and Jerry Palmer.

Alfred Patrick &#8220;Pat&#8221; Wild, and his unforgettable mustache, of Hanover, Illinois, passed away Tuesday, August 18, 2020 peacefully at home in the care of his loving family. A Funeral Mass will be held 10:00 a.m. Saturday, August 22,... View Obituary & Service Information

The family of Alfred Patrick "Pat" Wild created this Life Tributes page to make it easy to share your memories.

Alfred Patrick “Pat” Wild, and his unforgettable mustache, of...

Send flowers to the Wild family.