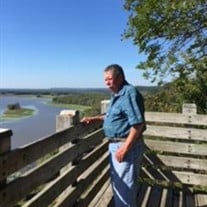 Alfred G. Rooker, of Savanna, IL, passed away Wednesday, February 23rd, at his home. Funeral service will be at 10:00 a.m. Saturday, March 5th, at St. John the Baptist Catholic Church in Savanna. Visitation will be from 9:00 a.m. to 10:00 a.m. prior to the service at the church in Antl Hall. Burial will take place in Lanark Cemetery. Luncheon will be held afterwards with friends and family. In lieu of flowers memorials may be made to the Michael J. Fox Parkinson’s foundation. Al was born July 6th, 1941, son of Alfred and Elaine (Nickel) Rooker. He grew up in Melrose Park and attended Leyden High School, graduating with the class of 1960. Al joined the United States Navy right out of High School, following in the footsteps of his father. While in the Navy Al married Margaret Holman. The couple raised two children and celebrated 53 years of marriage until Margaret’s passing in 2015. Later in life, Al married Elaine Deak. Together, Al and Elaine celebrated six years of marriage. After his time in the Navy, Al moved back to Illinois. He worked as an Electrician before working as an electrical technician and maintenance manager  in  firms ie.  International Harvester, Royal Box, Stone Container, and retired at Smurfit Stone Container Corporation in 2002. He was awarded the Roger Stone Chairman’s award for the technical training program he developed and was an instructor,  training 20 people  weekly  Monday thru Thursday with a 2 hour  test on Friday.  He was an expert at installing and troubleshooting  corrugated equipment and their operation.  He was an excellent teacher, worker, and his interest in helping you became a long term friendship and on Messmer Road you were always welcome for conversation and laughs with a beer or two in Als garage. Since Al was young, he always had a dog. His dogs were his best friends throughout his life. Al’s current dog is a black lab named Keesha. Whenever Al went for a walk Keesha was not far behind. In his spare time, Al liked to hunt ducks and dear, as well as fish. It’s what attracted him to the Savanna area in the first place. Al maintained his home equipment, automobiles and truck tools and guns meticulously.  Everything worked and was well taken care of.  If he could help you — he did!   At the center of Al’s life was his family. He taught his kids the value of hard work and was always a supportive father. As a husband, Al was always willing to do his part around the house. He cooked the meals, and shopped for the groceries. Alfred will be dearly missed by his wife, Elaine Rooker, of Savanna; two children, Cyndi (James) Cason, of Geneva, IL, and Allen (Melinda) Rooker of New Lennox, IL; two step-children, Derek Deak of Chicago, IL, and Monica (Edward) Brunell of Chicago, IL; four grandchildren,Jack Cason, Kate Cason, Nick Rooker, Nina Rooker; three step-grandchildren; and his sister, Shirley Pojman of Raleigh, NC. Alfred is preceded in death by his wife, Margaret; and his parents, Alfred and Elaine.

Alfred G. Rooker, of Savanna, IL, passed away Wednesday, February 23rd, at his home. Funeral service will be at 10:00 a.m. Saturday, March 5th, at St. John the Baptist Catholic Church in Savanna. Visitation will be from 9:00 a.m. to 10:00 a.m.... View Obituary & Service Information

The family of Alfred G. Rooker created this Life Tributes page to make it easy to share your memories.

Send flowers to the Rooker family.