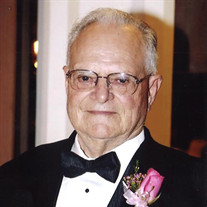 Alfred A. Geistkemper, age 89, of Savanna, IL, passed away Sunday, July 26, 2020 at MercyOne in Clinton, IA. A private funeral mass will be held in Al’s honor at St. John the Baptist Catholic Church, in Savanna, IL, with burial at S.S. Peter and Paul Cemetery, in Petersburg, IA. Though the mass is private for health and safety reasons, it will be live streamed through Law Jones’ Facebook page, at 12 noon on Friday, July 31, 2020. Family and friends are invited to share in Al’s life at lawjonesfuneralhome.com. Al was born July 9, 1931, in Petersburg, IA, the son of Hubert and Rosalia (Kramer) Geistkemper. Following his school years, Al enlisted in the United States Air Force, serving as an electrician. On June 22, 1955, Al married Verna Ament, in Worthington, IA. They went on to have four children, and celebrated 65 years of marriage. After Al was discharged from the Air Force, he inquired about a job at Clemen’s Furniture in Worthington. The owner, not looking for help, referred him to his son’s store, RG Fuller Furniture (later, Allied Furniture) in Savanna, IL. So, he and Verna moved to Savanna to build their life together. Al worked hard for that store and before long, he had bought in as a partner. As the years went on, he bought more and more stake in the business, until ultimately becoming the sole owner. He poured his heart and soul into his business, taking pride in serving his loyal customers. He was a self-taught man who frankly just figured it out, every step of the way. When Al wasn’t working, you could find him either with his family, whom he loved dearly, or working in his garden. Gardening always brought him peace. He was proud of his giant vegetable garden, that he planted in a vacant lot, after obtaining permission from the owner. Al also found time to invest his effort and talents into his home. A true handy man, Al was always looking to fix and improve things. If you ever got him to sit down, it was probably to watch his beloved Cubs, or play his harmonica. Al will be dearly missed by his loving wife, Verna; four children, Dale (Vickie) Geistkemper, of Omaha, NE, Sandra Schiller, of Naperville, IL, Kevin Geistkemper, of Savanna, IL, and Jay (Beth) Geistkemper, of Oahu, HI; six grandchildren, Catherine, Christine, Christopher, Ryan, Killian, and Finn; two sisters, Dorothy Lake and Joan Ament; a brother, Daniel (Sandra) Geistkemper; and two sisters-in-law, Lois Ament and Norma Simmons. Al is preceded in death by his parents, Hubert and Rosalia; three brothers (several more in infancy), four sisters, and his step-mother, Delores Deutmeyer.

Alfred A. Geistkemper, age 89, of Savanna, IL, passed away Sunday, July 26, 2020 at MercyOne in Clinton, IA. A private funeral mass will be held in Al&#8217;s honor at St. John the Baptist Catholic Church, in Savanna, IL, with burial at S.S.... View Obituary & Service Information

The family of Alfred A. Geistkemper created this Life Tributes page to make it easy to share your memories.

Send flowers to the Geistkemper family.