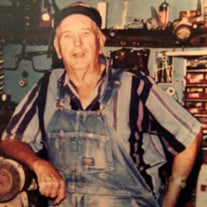 Alexander “Alex” Francis Brightman, age 96, of Chadwick, and a previous Road Commissioner of Fairhaven Township for 46 years, passed away Friday, October 9, 2020 at The Allure Nursing Center, Mt. Carroll. Memorials may be made to in his honor at PO Box 461, Chadwick, IL 61014. Alex was born January 11, 1924, in Fulton, Illinois, the son of Frank and Wilamina (Wolf) Brightman. His mother passed when Alex was just four years old, then his aunt helped quite a bit. As a young person, Alex worked on the family farm as well as at the rock quarry near Fulton. He also drove a livestock truck out of Charlotte, Iowa. On October 15, 1944, Alexander married Dorothy Dial of Chadwick, and they moved to the family farm. After a short time, Alex began working for Handel Brothers hauling Milk. He also worked for Queckboerner Truck Lines and Carly Kness, he was elected Fairhaven Road Commissioner 11 times. Alex and Dorothy began having children, first one, then twins, then triplets! One daughter, Jane passed in infancy. They went on to raise five daughters and celebrated 48 years of marriage. Dorothy passed in 1993. Alex would do anything for you if you asked, he never turned anyone down. He believed in doing an honest days work and helped improve the 51 miles of Fairhaven Township Roads over his career. He retired as Road Commissioner in 2009 when his daughter, Jean was elected to the position after working with Dad for 30 years. Since retirement he still enjoyed driving through the countryside to inspect the roadways and the crops, grabbing breakfast at a local greasy spoon, and spending time with family. He always enjoyed babysitting Peanut the dog and remembering old times with his close friend Everett Appel. Alex will be dearly missed by his three daughters, Sandy (Gerald) Foltz of Chadwick, Shirley Hadley of Moline, and Jean Brightman of Chadwick; six grandchildren, Jason (Angie) Foltz, Stacey Anderson, Brent (Amy) Brightman, Brenda Gilman and Mike Free, Freddie (Patty) Hadley and Tamela (Chad) Adams; and six great grandchildren, T.J. and Andrew Foltz, Corey Anderson, Kirsten Adams, Alyssa Brightman, and Josh Edens; special friends, Everett (Carolyn) Appel; and always by his side, his four-legged friend, Hymer. Alex is preceded in death by his wife; parents; three daughters, Jane Brightman, Judy Bibler and Sharon Brightman; one grandson, Duane Hadley; one sister, Mary Schafer; and a son-in-law, Fred Hadley, Sr..

Alexander &#8220;Alex&#8221; Francis Brightman, age 96, of Chadwick, and a previous Road Commissioner of Fairhaven Township for 46 years, passed away Friday, October 9, 2020 at The Allure Nursing Center, Mt. Carroll. Memorials may be made to... View Obituary & Service Information

The family of Alexander "Alex" Brightman created this Life Tributes page to make it easy to share your memories.

Send flowers to the Brightman family.