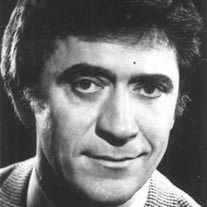 Albert "Al" J. Cairo, age 89, passed away April 30, 2021, at his residence. Born in Chicago to a show business family, Al attended the University of Illinois and Northwestern University, majoring in Speech and Theater. While pursuing a career in Sales and Marketing with Stewart Warner Electronics, in Chicago, he worked as staff announcer at WXFM and as Director/Choreographer for many local community theater companies. He also performed in professional revues and nightclubs in and around Chicago, and a at the famous Cork Club, in Houston, Texas. In the late 1960’s he turned to musical theater and appeared as featured dancer in Kiss Me Kate, Brigadoon, Camelot, Oklahoma, Student Prince, and Carousel, at the East Carolina Summer Theater in Greenvile, North Carolina. Also during this period as artistic director, he was instrumental in developing the concept of “modular theater” for the renown Oak Park Village Players, while at the same time operated the Cairo School of Dance, in Oak Park, Illinois. In 1970 his mixed theatrical and marketing background led him to industrial theater, where he joined the staff of Fred A. Niles Communications in Chicago, where he remained as Vice President and head of the Industrial Show Department until 1977. During that period, he directed and choreographed over 150 industrial shows for many of America’s top corporations, including Goodyear, Xerox, McDonalds, Nabisco, Navistar, Midas Muffler, Amoco, Baxter, Kraft Foods and many more; and with many of America’s top performers, i.e. Bob Hope, Dinah Shore, Tony Bennet, Ernie Ford, Mitzie Gaynor, Nanette Fabray, David Copperfield, and others. Throughout these years he often returned to the legitimate stage to perform, direct, write and/or choregraph numerous equity plays, musical revues, and productions. In 1982, he formed Select Group Productions, Inc. in Chicago, and as President and Creative Director until 1992, served a wide and diverse client base in the key areas of business program development. Al retired to Savanna, Illinois in 1993, where he owned and operated the Nest at Palisades Cabins with his wife Maggie, until her passing in 2020. Al is survived by his daughter, Amanda Cairo; son, Cary Cairo; grandson, Christopher Cairo; nephew, Peter Palermiti; and niece, Paula Noffsinger. Al is preceded in death by his wife, Maggie, parents, Albert and Ruth, brother, Robert , and sister, Gloria.

Albert "Al" J. Cairo, age 89, passed away April 30, 2021, at his residence. Born in Chicago to a show business family, Al attended the University of Illinois and Northwestern University, majoring in Speech and Theater. While pursuing a career... View Obituary & Service Information

The family of Albert J. Cairo created this Life Tributes page to make it easy to share your memories.

Send flowers to the Cairo family.