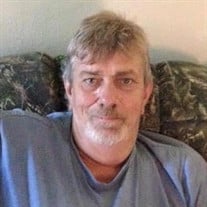 Albert “Al” Frederick passed away Saturday, April 2, at FHN Memorial Hospital in Freeport, IL. A celebration of Al’s life will be held at a later date. Al was born February 4, 1960, son of William and Anna Frederick. He was born in Richmond KY, and later moved to Chicago, IL. In Chicago Al met the love of his life, Cathy Vilcek. Al and Cathy moved to Savanna, and married in 1990. Al was a mechanic for most of his life, and had a life long love of cars. When he and Cathy moved to Savanna, Al began working at Milo and Beaver’s, where he worked for 12 years. Al could fix anything and everything, and would share his talents with anyone in need. He loved to help people, and never asked for anything in return. If Al saw something was broke, he would fix it. When Al wasn’t working, or fixing things for friends and family, he loved spending time in the outdoors. He was an avid fisherman, camper, and loved to ride four wheelers through fields and forests. Al especially enjoyed going out to dinner with his wife, Cathy. Al will be dearly missed by his wife, Cathy Frederick of Savanna; brothers and sisters William, Anna, Sharon, Francis and many loving family and friends. Al is preceded In death by his parents, William and Anna and sister Kathrine.

Albert &#8220;Al&#8221; Frederick passed away Saturday, April 2, at FHN Memorial Hospital in Freeport, IL. A celebration of Al&#8217;s life will be held at a later date. Al was born February 4, 1960, son of William and Anna Frederick. He was... View Obituary & Service Information

The family of Albert "Al" Frederick created this Life Tributes page to make it easy to share your memories.

Send flowers to the Frederick family.