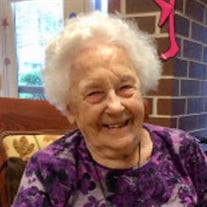 Agnes Cecilia (Houlihan) Weigand, age 98, of Lindenhurst, Illinois, previously of Savanna, passed away Tuesday, November 24, 2020 at Victory Lakes Nursing Center, Lindenhurst. A semi-private visitation will be held Tuesday Dec 1 from 10:00 - 11:00 a.m. at the Law-Jones Funeral Home, Savanna, Illinois. A private family Funeral Mass will be held at 11:00 a.m. at St. John the Baptist Catholic Church, Savanna. Burial will be at St. John’s Cemetery in Savanna. Masks are required. Agnes would want you all to be safe during these times so you may watch from home at 11:00 a.m. Tuesday, or thereafter, on the Law Jones Facebook Live Group. In lieu of flowers, Agnes and her family request that you contribute to a food bank in your area to help those in need during this challenging pandemic or to St. John’s in Savanna. Agnes was born January 31, 1922, in Chicago, Illinois, the daughter of George and Clara (Wiechers) Houlihan. She grew up on the south side of Chicago at 48th and Princeton, the eldest of three sisters. She was an active member of the Fuller Park community and St. Cecilia’s parish, playing volleyball, dancing, and participating in Girl Scouts. She often said she was lucky to have so many cousins who were friends and neighbors, and she was always there to lend a hand with a smile. Agnes graduated from Mercy High School in Chicago, and then went on to receive a degree from Chicago Teacher’s College. Agnes married Charles Weigand Jr. on September 28, 1946 in Chicago and celebrated 51 years of marriage until Charles’s passing. They moved to Morton Grove, Illinois in 1952 where they raised their 4 children, John, Gail, Joan and Anne. In the 1960s, Charles and Agnes began vacationing on the various islands along the Mississippi River near Savanna, Illinois. They loved the outdoors, boating, fishing and camping. The friends they made on the River became an extension of their family. In 1975 they found their dream property just north of Savanna, with their own small beach and a dock, and remained until 2017. Agnes worked at Chestnut Mountain Resort and at the Savanna Army Depot. She really loved the people and the river life there. Once retired, she had her hands full with their expanding brood of grandchildren and great-grandchildren. Famous for her fish fries, porcupine balls, chex mix, and s’mores around the campfire, Agnes always found room for one more at the table, and no one minded that the signal for dinner was the smoke alarm going off. Agnes kept busy at St. John the Baptist Church in Savanna, as a member of the Catholic Daughters of America, helping with luncheons and the holiday bizarre, and singing in the choir. She was a road commissioner, volunteered at the thrift store, and was especially passionate about the local English as a Second Language (ESL) program. Agnes was always ready to help those in need. She also enjoyed gardening and spending time with friends. Agnes was truly an angel here on earth—she overflowed with joy, love, laughter, faith, and helpfulness, and was a blessing to all who knew her. She will be dearly missed by her son John Weigand of Batavia, Illinois; three daughters Gail (James) Pazdur of Libertyville, Illinois, Joan (Mark) Hottinger of Madison, Wisconsin, and Anne (Michael) Kammer of Johnsburg, Illinois; 11 grandchildren and 12 great-grandchildren; and sister Clara Kirn of Arizona. Agnes is preceded in death by her parents George and Clara Houlihan, husband Charles, and sister Frances Radostits. The family would like to give a special thank you to the staff of the Village of Victory Lakes in Lindenhurst (2017-2020) for their commitment and compassionate care for Agnes during her time with them and to the staff at Pinnacle Place in Savanna (2013-2017).

The family of Agnes Cecilia Weigand created this Life Tributes page to make it easy to share your memories.

Send flowers to the Weigand family.